A wide range of foods contain ingredients that we call emulsifiers. A new study in mice shows that these compounds can produce both physiological and behavioral changes.

Food additives have always generated a great deal of attention, and, rightly so, as they are all-pervasive, so we should scrutinize their impact on our health. Recently, emulsifiers have been drawing fire.

Manufacturers use these chemicals to alter food's texture and extend its shelf life.

They include emulsifiers in many foods, for instance, some types of bread, chocolate, margarine, processed meats, and more.

Earlier studies have shown that emulsifiers can alter the microbiome of mice, causing low-grade inflammation and increasing the risk of obesity and metabolic disorders.

A study in humans concluded that gut bacteria "can be directly impacted by these commonly used food additives, in a manner that subsequently drives intestinal inflammation."

Recently, a group of researchers from Georgia State University in Atlanta took this investigation to the next level, setting out to investigate whether two common emulsifiers — carboxymethylcellulose (CMC) and polysorbate-80 (P80) — might also influence mental well-being.

Although the jump from gut health to psychological health might seem like a stretch, scientists have already described a clear, two-way conversation between the gut and the brain.

Studies have shown that our gut health and the health of our gut bacteria can have a substantial influence on our mental well-being. For instance, one study from 2011 found that treating mice with Lactobacillus rhamnosus — a species of "good" bacteria — caused measurable changes in the brain and reduced anxiety-like behavior.

Another study showed that mice that had no gut bacteria express higher levels of anxiety-like behaviors when researchers compared them with controls. A more recent study showed that antibiotic use in mice in early life could significantly alter the microbiome, anxiety levels, and social behavior over the long-term. 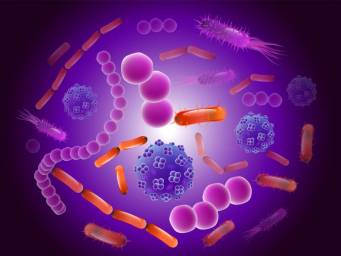 Are gut bacteria the key to healthy aging?

Do gut bacteria hold the key to healthy aging? Some researchers believe that they do.

This most recent study investigated whether P80 and CMC might alter the mental state of mice. The researchers published their findings in the journal Scientific Reports.

The team added CMC and P80 to the drinking water of mice for 12 weeks. Then, they measured their behavior, changes in their microbiome, and other physiological parameters.

Co-lead researcher Prof. Geert de Vries explains their work in brief, "We asked the question: Can emulsifiers' effects on general systemic inflammation also be extended to the brain and to behavior? The answer was yes."

The impact of emulsifiers

Specifically, they saw an increase in anxious behavior, particularly in male mice. In female mice, there was a reduction in social behavior.

Exactly how emulsifiers might affect behavior is not known, but there are some theories.

"[W]e know that inflammation triggers local immune cells to produce signaling molecules that can affect tissues in other places, including the brain. The gut also contains branches of the vagus nerve, which forms a direct information pathway to the brain."

Why there should be sex differences is harder to explain. However, scientists know that there are certain differences between the way male and female immune systems work, so this might offer clues.

The group plan to continue this line of investigation. Switching from the mouse model into larger animals will be a necessary move, as the authors write, "determining the extent to which studies in mice are relevant to humans is inherently difficult," particularly in behavioral disorders.

Co-lead researcher Benoit Chassaing says, "We are currently investigating the mechanisms by which dietary emulsifiers are impacting the intestinal microbiota as well as the human relevance of those findings."

It is also worth noting that, of the four anxiety tests, emulsifier-fed male mice only showed significant differences in one. The test in question was the open field test and, according to the authors, research suggests it is particularly sensitive at measuring "normal" anxiety, as opposed to anxiety disorders.

Over recent years, many observers have noted a rise in anxiety in Western society. At the same time, inflammatory bowel disease has shown a marked increase. The authors ask whether food additives might play a part in these shifts.

For now, the researchers recommend that we should assess food additives for their impact on gut bacteria. Science has now shown, beyond a shadow of a doubt, that the microbiome plays a significant role in health; perhaps food safety laws need to follow suit.