A healthful diet can "significantly reduce" symptoms of depression. That's the definitive conclusion from a meta-analysis of existing randomized, clinical trials.

Researchers have long suspected that a poor diet can lead to poor mental health. Although the underpinnings of mental health problems are complex, some scientists have suggestedthat "diet is as important to psychiatry as it is to cardiology, endocrinology, and gastroenterology."

But does the overall existing evidence support this claim? Dr. Joseph Firth, an Honorary Research fellow at the University of Manchester in the United Kingdom, led scientists who set out to investigate.

Dr. Firth and colleagues note that, while poor diet can impact mental health negatively, this does not automatically mean that improving one's diet can ease symptoms of depression and anxiety.

So, to establish definitively whether a better diet can improve mood disorders, the scientists examined data on nearly 46,000 people and published their results in the journal Psychosomatic Medicine.

Meals high in vegetables and fiber are key

The researchers examined the information available from major electronic databases, searching for "all randomized controlled trials" that studied the effects of dietary interventions on symptoms of depression and anxiety.

The scientists narrowed down their search to 16 eligible randomized, controlled trials that summed up information from 45,826 participants. 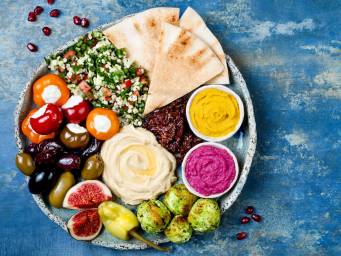 An analysis of existing studies finds a clear link between plant-based diets and a lower risk of depression.

The analysis revealed that every kind of dietary improvement "significantly reduced depressive symptoms." However, the dietary changes did not affect anxiety.

"The similar effects from any type of dietary improvement suggests that highly-specific or specialized diets are unnecessary for the average individual. Instead, just making simple changes is equally beneficial for mental health."

"In particular, eating more nutrient-dense meals which are high in fiber and vegetables, while cutting back on fast foods and refined sugars appears to be sufficient for avoiding the potentially negative psychological effects of a 'junk food' diet."

Healthful diet may be a 'viable treatment'

Study co-author Brendon Stubbs, a clinical lecturer at the NIHR Maudsley Biomedical Research Centre and King's College London, also reports on the findings and stresses the importance of exercise.

"[O]ur results within this study found that when dietary interventions were combined with exercise, a greater improvement in depressive symptoms was experienced by people."

"Taken together, our data really highlight the central role of eating a healthier diet and taking regular exercise to act as a viable treatment to help people with low mood," adds Stubbs.

Interestingly, the analysis found that the studies of female participants produced even more significant mental health benefits from diet improvements. The researchers are intrigued by this, as they also are about the mechanisms that might mediate the relationship between diet and mental health.

The researchers say they have yet to understand why some of their data showed significantly greater benefits for women, adding that there was more work to do on this discovery.

"And we also need to establish how the benefits of a healthy diet are related to improvements in physical health," says Dr. Firth. "It could be through reducing obesity, inflammation, or fatigue — all of which are linked to diet and impact upon mental health."