The majority of people with sleep apnea do not receive a diagnosis. However, brain scans have revealed that there may be an association between this condition and a form of dementia.

There may be an association between sleep apnea and dementia, according to a recent study.

According to the American Sleep Apnea Association (ASAA), an estimated 22 millionpeople in the United States have sleep apnea.

This condition, which causes a person to stop breathing during sleep, can be infrequent or regular.

Doctors refer to regular sleep apnea as obstructive sleep apnea. Without treatment, it can lead to a number of cardiovascular problems, including high blood pressure, stroke, and chronic heart failure.

Obstructive sleep apnea also has links to both depression and type 2 diabetes.

Along with colleagues, he authored a study to investigate whether there was a potential relationship between sleep apnea and a particular Alzheimer's biomarker.

This biomarker is a protein called tau, which is present in the brains of people with Alzheimer's. Tau proteins form tangles that doctors can identify on scans.

"A person normally has fewer than five episodes of apnea per hour during sleep," states Dr. Carvalho. The issue is that many people do not know that they have the condition.

The ASAA report that an estimated 80 percent of people with moderate-to-severe obstructive sleep apnea do not get a diagnosis.

To determine which of the participants experienced sleep apnea, researchers asked their bed partners to look out for episodes of stopped breathing during the night. A total of 288 people aged 65 years and older took part in the study. None had any signs of cognitive impairment.

In addition to asking the participants' bed partners to monitor their sleep, the researchers used PET scans to check whether the tau protein was present in their brains. Specifically, they examined the entorhinal cortex area, as tau tangles are more likely to build up there. This part of the temporal lobe plays a role in memory, navigation, and time perception.

Dr. Carvalho and colleagues found a link between sleep apnea and a higher presence of tau in the brain.

The overnight monitoring process revealed that 43 people experienced apnea episodes during the night. On average, those participants had levels of tau in the entorhinal cortex that were 4.5 percent higher than those in the participants without sleep apnea.

The team identified this increase after controlling for other factors, such as age, sex, cardiovascular risk factors, and other sleep issues. 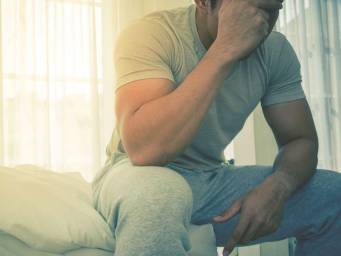 Sleep apnea may stop you from forming life memories

The medical community considers these results to be preliminary as they have not yet featured in a scientific journal. However, the researchers will present them at an upcoming American Academy of Neurology meeting in Philadelphia, PA.

Dr. Carvalho concludes that these results "raise the possibility that sleep apnea affects tau accumulation." However, he describes the findings as a chicken-and-egg scenario, adding: "It's also possible that higher levels of tau in other regions may predispose a person to sleep apnea."

Previous research has identified a link between dementia and sleep apnea. However, further studies using larger sample sizes will be necessary to validate the findings.

The methods that the Mayo Clinic team used also mean that it is not certain whether participants actually had sleep apnea, how severe their condition was, and whether they were already receiving treatment.

If there is a relationship between sleep apnea and dementia, it is not entirely clear why this exists. Researchers have suggested a number of different reasons. One could be that the brain consolidates memories during sleep, and interrupting this process might lead to memory issues.

The lack of oxygen reaching the brain during apnea episodes could be another reason, especially if this puts stress on the organ.

What you need to know about sleep apneaSleep apnea is a common sleep disorder in which a person will repeatedly stop breathing when asleep. This can occur due to either a blocked airway or a signaling problem in the brain. When untreated, sleep apnea can have serious complications including heart disease. We explain more about the condition in this article.

Tips for preventing Alzheimer's diseaseScientists do not know what causes Alzheimer's, but researchers have linked it with some lifestyle factors. Find out how keeping the mind and body fit may help.

Insomnia: Everything you need to knowInsomnia is a sleep disorder that can disrupt a person's daily life. About 30-40 percent of people in the U.S. experience insomnia, and it can be caused by physical or mental health issues. We look at the types, symptoms, diagnosis, and treatment and ask whether using media technology in the bedroom might be a factor.