Cancer treatments can work, but the same factors that help them eradicate tumors may also accelerate aging processes in the body — especially the brain. New research explores.

Breast cancer treatments leave their mark on the brain years after completion, a new study suggests.

Chemo brain occurs during cancer treatment, and it may last for a long time after the treatment is over.

People experiencing it report a loss of quality in cognitive abilities, which interferes with their daily lives.

Another study showed that the effects of chemotherapy, added to those of cancer itself, can impact numerous cognitive abilities — including memory.

In a new study, researchers from the University of California, Los Angeles (UCLA) delve deeper into this issue by working with women who went through breast cancer treatment in the past.

The study authors explain that the treatments that doctors prescribe for breast cancer can affect a person's long-term health, leading not just to cognitive problems, but also to persistent fatigue as well as physical pain.

Some chemotherapy agents, as well as radiation therapy, destroy cancer by damaging the DNA of cancer cells. However, this can also damage the DNA of surrounding healthy cells, thereby accelerating aging processes.

The team — conducted by Judith Carroll, an associate professor of psychiatry at the UCLA Cousins Center for Psychoneuroimmunology — worked with 94 women who had had a form of breast cancer treatment 3–6 years before the start of the study. 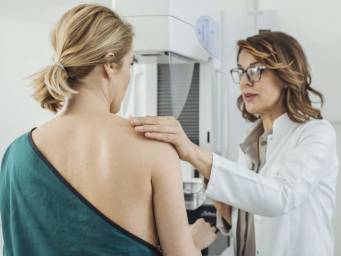 Breast cancer screening: How does it truly impact survival?

Does screening for breast cancer really make a difference?

They analyzed markers of biological aging, such as high DNA damage levels, reduced telomerase activity, and shortened telomeres in blood cells. Telomeres are the "caps" that protect cell DNA, and telomerase is an enzyme that helps maintain telomere length.

As telomeres become shorter and shorter, this eventually sends a signal that the cell is aging and will soon die. Therefore, telomerase activity can be an indicator of how well the body is able to maintain cell health.

Furthermore, those with signs of low telomerase activity also showed poor attention and a decline in motor (movement) speed.

"These findings," says Carroll, "are important because they provide further information about what might be happening after cancer treatment that impacts cognitive decline in some individuals."

"This information [...] may lead to new interventions to prevent these cognitive declines," she adds.

Carroll also believes that establishing the connection between markers of biological aging and signs of cognitive problems following cancer treatment could pave the way to future studies addressing this issue.

"The work is novel by identifying key factors in biological aging and connecting them to cognitive function, which initiates new avenues of research."