A team of surgeons has successfully performed a face transplant for a 26-year-old man who had a self-inflicted gun injury. The team used facial skin from a donor to replace much of the man's face, as well as partially replacing his bone structure.

A team of over 100 medical professionals at New York University (NYU) Langone in New York City performed the transplant.

The patient's name is Cameron Underwood. He is a 26-year-old man who lost most of his lower jaw, teeth, and nose as a result of a self-inflicted accidental gunshot.

The man had also damaged his maxillary and palate as a result of the accident.

Dr. Rodriguez and his team performed the transplant surgery on January 5, 2018. The procedure lasted 25 hours and ended the following morning.

Since then, the NYU Langone specialists have performed several follow-up procedures, and they now report on their achievement and the techniques they used.

To carry out the transplant, the surgeons used several cutting-edge technologies. For instance, the following techniques allowed the surgeons to place the grafted face with a high level of precision:

The surgeons used the entire middle and lower parts of the donor's face and skull to complete the transplant. In all, they replaced and reconstructed the patient's upper and lower jaws, 32 teeth and gums, the roof and floor of the mouth, the lower eyelids and cheeks, and the nose and part of the nasal passage. 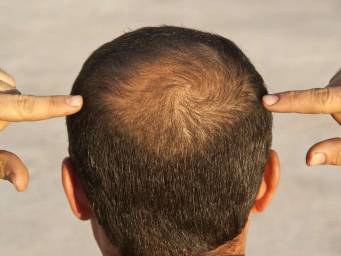 Micro LEDs could be the answer to hair regrowth.

Also, Dr. Rodriguez and team used an innovative approach to preserve the identity of the donated face: a 3-D-printed mask of the donor's features.

After the transplant, when Underwood's face had healed and the inflammation had subsided, Dr. Rodriguez and team conducted several minor follow-up surgeries to achieve the best aesthetic results.

"Technical advances," Dr. Rodriguez says, "have increased our ability to tackle the most complex cases more precisely with maximal aesthetic and functional results."

He adds, "Advances in medical technology allow us to more rapidly evaluate donors and recipients for [a] face transplant, and to perform surgery more safely and efficiently."

The video below details the procedure further:

The doctors also note that the first similar transplant they conducted lasted over 36 hours, so the fact that they managed to reduce surgery time by 11 hours is a highly significant achievement.

"Having already done two face transplants, we identified even before we entered the [operating room] where we could reduce surgical time," Dr. Rodriguez says.

"This is critically important," he adds, "not only from a fatigue factor for the surgical team, but also for Cameron's recovery. A shorter surgery often translates into less risk of complications."

In comparison with the first transplant, the surgical team also achieved significant reductions in the time dedicated to postoperative care, as follows:

Dr. Bruce E. Gelb, a transplant surgeon at NYU Langone who also participated in Underwood's transplant, comments, "We are thrilled that Cameron is responding so well to the transplant."

"Our team has established a successful, novel, patient-donor matching protocol and immune suppression regimen that we believe provides the best outcomes for our patients because the risk of rejection and toxicity is greatly minimized."