Many believe that childbirth can protect women against breast cancer, but new findings suggest that this benefit may take 2 decades to make an appearance.

The risk of developing breast cancer differs between individuals.

The Centers for Disease Control and Prevention (CDC) suggest that several factors come into play.

For instance, people cannot change their age, genetic mutations, and family history, while they can control their weight, alcohol, and exercise levels.

One factor that some researchers believe can reduce a woman's risk of breast cancer is childbirth.

However, according to a new study, the theory that childbirth can protect a woman against breast cancer may need further clarification. The study's findings suggest that this protection does not instantly occur. Instead, it may take a considerably long time to emerge.

Researchers also found that childbirth only benefits women above a certain age when it comes to breast cancer risk levels. In fact, they found that younger women who had recently given birth experienced elevated risk levels.

The impact of childbirth

The large-scale analysis examined data from 15 studies from around the world. Scientists looked at over 800,000 women with a specific focus on factors that other studies on the topic had overlooked.

This included things that could affect breast cancer risk, such as family history of the disease and breastfeeding. 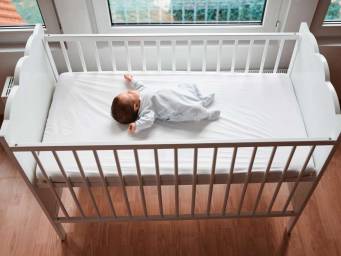 Is my newborn sleeping too much?

Most newborns spend more time sleeping than they do awake, though the sleep may happen in small chunks or on an irregular schedule.

Published in the Annals of Internal Medicine, the study found that breast cancer risk elevated in women who had given birth and were aged 55 or younger.

This risk hit its highest point about 5 years after women had given birth. At this time, mothers in this age range had an 80 percent higher chance of developing breast cancer compared with those women who had not gone through childbirth.

The authors note that this risk was more prominent for women who fit into one of three categories: those who had a family history of breast cancer, people who were older at the time of their first birth, or those who had had more children overall. Breastfeeding appeared to have no impact.

The study's most important finding, however, was that the elevated breast cancer risk disappeared 23 years after childbirth. After more than 2 decades, women began to experience a form of protection from the disease.

"What most people know," says Hazel B. Nichols, Ph.D. — based at the University of North Carolina in Chapel Hill — "is that women who have children tend to have lower breast cancer risk than women who have not had children, but that really comes from what breast cancer looks like for women in their 60s and beyond."

"We found that it can take more than 20 years for childbirth to become protective for breast cancer, and that before that, breast cancer risk was higher in women who had recently had a child."

Not all younger women had the same risk levels. For example, women who had their first child after the age of 35 had a higher risk, while those who experienced childbirth before the age of 25 saw no increased risk.

However, the overall chance of getting breast cancer was still relatively low for any woman who had given birth.

There were only 41 more cases of breast cancer in every 100,000 women aged 41–45 who had had a child in the past 3–7 years. This was compared with women in the same age range who did not have children. This figure rose to 247 more cases by the time women reached the age of 50.

The uniqueness of cancer

Breast cancer is less common among young women, making some of these results less surprising than others. However, the findings could help educate medical staff and the public — especially those who may believe that childbirth immediately protects them against breast cancer.

Scientists could also use these findings to develop a more useful model for breast cancer risk. In turn, this could lead to more effective screening and prevention methods.

However they use the results, researchers stress the importance of remembering that there is no one form of breast cancer.